As you can see above, most of my previous discussion of Persona 3: Portable has focused on one half of the gameplay: the social/high school life simulation. But what about the other half of the game, the dungeon crawl? 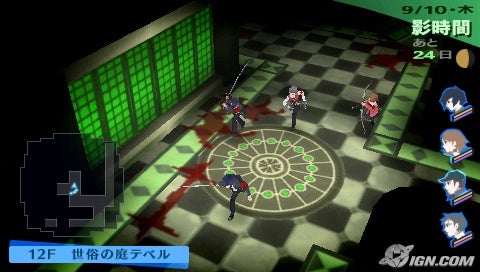 You’ll tackle Tartarus, the game’s dungeon, one randomly generated floor at a time. Each floor may contain chests or a portal out. It will contain the staircase leading to the next — and it will almost certainly contain groups of monsters, depicted as black blobs that wander about the dungeon floor. Bumping into these blobs will trigger a battle (no annoying random battles here, thank heavens!). They’ll chase you if you come within their sight, and if they run into you, odds are the monsters will get the first turn in the resulting battle… but strike a blob with your weapon, which is easier if you sneak up from behind, and you’ll move first. 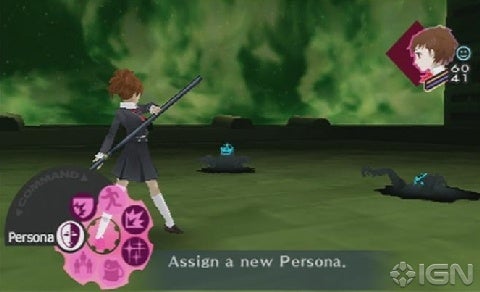 Once combat begins, it looks like your typical menu-driven, turn-based JRPG: each party member* can attack, defend, use the special powers conferred by his/her inner spirit, the titular Persona, etc. Unique in the party, the main character can switch between different Personas, each with different strengths, weaknesses and powers; other party members are stuck with just the one set of abilities.

The twist to this system is the critical importance of targeting vulnerabilities. Attacks in the game are divided into nine types — Pierce, Slash, Fire, Electricity, Light, etc — and different party members, and different enemies, are weak against different types of attack. If a combatant is struck by an attack that targets his/her weakness, the resulting critical hit will knock him/her/it flat. And every time a foe is knocked down, the attacker will get an extra turn. Finally, if all monsters are knocked down, the party can launch a devastating “all-out attack”.

The significance of this is that the game encourages you to chain multiple critical hits in the same turn, culminating in an all-out attack. So if you get in the first move — remember, by striking monsters with your weapon on the dungeon map — and the party has the right damage types at its disposal, you can go through trash mobs like Clint Eastwood in a spaghetti western, where he could pull his gun and mow down three bandits before they even blinked. Conversely, if the monsters move first and they’re especially powerful, or you’re especially unlucky, it’s possible to wipe in a single volley of queued critical hits (luckily, monsters can’t launch all-out attacks…).

For most fights, this system works very well. It pushes you to prepare for battle by using a well-balanced party and keeping a varied selection of Personas on hand. It means there’s a bit of tension on the dungeon map, as you take care to sneak up on monsters, or conversely run like blazes to avoid having the monsters run into you. And given the number of trash mobs you’ll fight, it keeps ordinary battles moving at a good, brisk pace.

Where this system doesn’t work so well is in boss battles. It takes a long time to defeat the typical boss monster, and a simple, elegant system built for speed is not well suited for protracted pounding matches. My boss fights tend to turn into repetition of the same pattern of moves over and over – A attacks, B buffs then attacks, C debuffs then attacks, D heals. And as a result, I am often all too glad when boss fights are over.

Still, on the whole, I like Persona 3: Portable’s battle system. It’s not every boss fight that stretches on for too long. And even those that do are outweighed by the fun I have as I tear through the game’s ordinary encounters.

* This is a change from the PS2 version, in which you only directly controlled the main character — your party members had their own AI.

2 thoughts on “Combat in Persona 3 Portable: The quick and the dead”