There have been many innovations in the RTS genre since it crawled out of the Garden of Herzog Zwei. But when I recently played a number of pre-2007 games, there was one innovation in particular that I sorely missed: the ability to zoom all the way out to see the entire map at a glance.

This is what Supreme Commander 2 (2010) looks like, fully zoomed out: 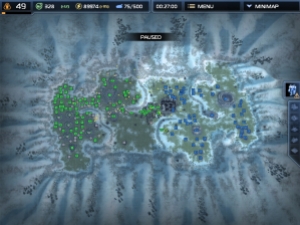 In both cases, I’ve zoomed out to see the whole play area. There is no minimap in either screenshot, because one isn’t needed: Sins doesn’t even have a minimap, while SupCom 2 allows players to call one up (see the top right-hand corner) but leaves it off by default. While fully zoomed out, I can easily give commands to buildings and even to groups of units (note that individual units are represented as radar blips in SupCom 2, and, even more abstractly, as horizontal bars in Sins).

Now, if we go back just a few years, things are very different. Take a look at Rise of Legends (2006):

Note the minimap in the lower-left hand corner. My field of vision, the white trapezium, only covers a tiny proportion of the play area. And remember, this is fully zoomed out! If I’m watching point A on the map and something happens at point B, I have to dart over to B using the minimap, click a bunch of units, and then find my way back to A again.

Being able to fully zoom out, as seen in Sins and SupCom 2, is clearly a boon. It makes a game easier, and quicker, to control; vital in a genre where, by definition, multiple things happen at once. Just as importantly, it helps the “feel”  of the game. When I can survey the whole battlefield or star system with just one flick of my scroll wheel, that contributes to the illusion that yes, I really am an interstellar warlord, not a mere glorified platoon commander.

So it surprises me that this is such a recent development – it seems to have been pioneered, under the name “strategic zoom”, by the original Supreme Commander (2007). Like many innovations, it does seem obvious with hindsight. Perhaps the technology didn’t support it prior to then*? But the important thing is that it’s hard to go without it. I miss it in old games, such as Rise of Nations and Rise of Legends. And I’d miss it in new games that have a restrictive zoom (Starcraft 2, from what I’ve seen, fits this bill). In that regard, too, it’s like so many other successful innovations: couldn’t imagine it beforehand, can’t live without it afterwards.

*  Apparently the Supreme Commander engine “was built from day one with this technology in mind”, according to “Servo” from Gas Powered Games. And in this forum thread, Ryan McGechaen (aka “tribalbob”) from Relic, the developer of Company of Heroes, explains: “Supreme Commander’s high-altitude camera zoom works because as you zoom out; assets are replaced with lower res assets and then eventually become dots.  Unfortunately, the Essence engine does not support this LOD (Level of Detail) swapping; we can’t increase the zoom distance without increasing min spec requirements.”

2 thoughts on “I can see my base from here! Strategic zoom in RTSes”

Welcome to Matchsticks for my Eyes, a site about stories, games, and soundtracks.